I was going through my blogs one day to check out old book reviews. I came across one from 2009 called 'The Christmas Clock.' The book has a subplot of early onset Alzheimer's in one of the characters. I remember reading it back then, feeling drawn to the story, because of my own mother. This was well before she went downhill so fast. I enjoyed it, as some of you may. I am reposting my review here, for those who may be interested. 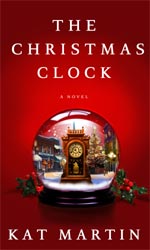 The Christmas Clock is the latest book by bestselling author Kat Martin. It's the story of a young boy named Teddy Winters, who at the age of eight lives with his grandmother, Lottie Sparks. Unbeknownst to him and many others in their small Michigan town, Lottie is suffering from a very rapidly progressing form of Alzheimer's disease. She is seeking to find him a permanent home before she becomes too disabled. At the same time, Teddy is trying to earn money to by his beloved grandmother a mantel clock that reminds her of her childhood.

Teddy goes to work doing odd jobs around the mechanic shop owned by Joe Dixon. Joe has been trying to rebuild his life after doing time for accidentally killing a man in a bar fight many years ago. His rage had been sparked by the love of his life, Sylvia Winters, suddenly taking off, claiming she had never loved him, which he felt in his heart of hearts wasn't true.

Sylvia has recently returned to town, carefully guarding the secret that had caused her to flee all of those years ago. She is also looking to start over, but is finding it difficult, as she keeps running into Joe, and realizes that her feelings haven't changed.

At the same time, Sylvia is becoming close friends with Doris Culver, her landlord. Doris and her husband Floyd have been married forever, but lost the spark years ago. They dance around wanting to revive the relationship, but neither will be the first to admit it or to make the first move.

All of these people are interconnected, and every choice that they make somehow affects all of the others. Though highly predictable, as most romance novels are, each of these choices eventually leads to a Christmas miracle of sorts for everyone involved. A few lessons in life and love can also be gleaned from these pages if you pause for a second to reflect.

It's an extremely easy read, designed to allow you to relax for a couple of hours during this hectic holiday season. It's not written to change the world, but to entertain. Those with families touched by Alzheimer's will feel a sort of kinship with the characters dealing with it, even though Lottie's descent into the depths of dementia feel a little too fast for reality.