GBE2: One Year Ago

I haven't posted to this blog since June 10th. After Dad died, it just got to be too difficult to write. When I had started this blog, it was two weeks before he went into the hospital. We had plans to work on it together. He was always calling me with stories of Mom and we supported each other. Alas, that project just wasn't meant to be, I guess. It has been hard to conceive of continuing it, but I will still attempt it here and there. This isn't just about me - this is for all of you.

So, that all being said, Happy Holidays! We are two days past Christmas and a few days away from the New Year. The holiday season always makes one reflect on life and love. This holiday season I have been reflecting on one year ago and how much everything has changed.

One year ago, I drove home on Christmas Eve. The usual 6 1/2 hour drive seemed even worse than usual because I was fighting a migraine. By the time I got to my parents' house, my eyeballs felt like they were being ripped out of my head. My stomach was turning and the world was spinning. I just wanted to go to bed, but my father insisted I was going to go to church with them this year. He knew it would be the last time we would be able to go together on Christmas Eve, only we thought it would be because Mom would be in a home by summer. Not because he was going to die.

I tried to take something for my head and stomach, but it wasn't working. We got into an argument with Mom because she smelled so bad and wasn't dressed right. She hadn't showered in at least a week and had been sleeping in her clothes. But we couldn't convince her to take a shower before we left. She kept insisting that she was fine. And she kept adding layers of clothes over the ones she was already wearing. At least they were all red for Christmas!

She kept hugging me because she was happy to see me. I can't even begin to describe what the B.O. was doing to my head and stomach. But at the same time, I wanted to collapse against my mommy's shoulder because I felt so sick.

The bickering finally had to cease and we made it to church. Like always, Dad had to walk all the way up to the front of the church. That is where the light was the brightest and the music was the loudest. The poinsettias in front of us were expanding and contracting, along with the thudding pain in my head. I remember laying my head on Mom's shoulder at times.

I remember little else of the service, other than spotting a former student sitting off to the side with his family. I chatted with him for a bit after the service. We had connected on Facebook, but probably not seen each other in at least 13 years or so. I also remember the pastor doing his sermon and using me as an example for whatever it was. He kept "talking to me." I struggled to pay attention. I was afraid I would throw up on his shoes if I looked away. I remember introducing myself afterwards and apologizing for being so out of it.

Christmas Day was relatively uneventful. I am pretty sure Mom kept wearing the same clothes and had slept in them again. I had wanted to make a turkey, but was coming off of the migraine. Dad and I agreed that my turkey taco soup would be an acceptable alternative. I cooked it and we gathered around the TV watching football.

The following night we decided to actually make a turkey. I asked Mom to help me, because I knew this would be the last time she could do so. She remembered enough to help me bag the turkey for roasting, but couldn't remember her recipe for the stuffing. I wish I would have paid more attention when I was younger. But my sister is the one who always made it with her and I am not a fan of stuffing.

The turkey ended up being perfect. And it is the only one I have ever made. 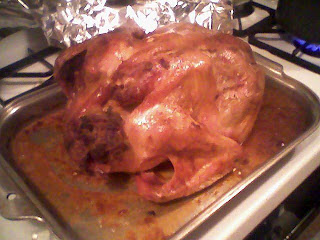 I made all of the traditional side dishes and fixed my mom a plate. It was the best meal she had eaten in a while. She raved about how wonderful it was. And I was proud of myself.

There were several other events that transpired during that trip. But I will save them for another entry. Thanks for starting the journey with me down Memory Lane.
Posted by Andi at 4:07 PM