F is for Football

This past September, a friend of mine had tickets to the Michigan-Bowling Green game up in Ann Arbor. I've been a Michigan fan since I was a kid, and I went to BG. What a perfect combination! I called my parents and asked my mother specifically if she would be interested in going to the game with me. She agreed, so I told my friend I would take his tickets and take my mom.

Ironically enough, the Friday before the game, my paternal grandmother passed away. I was going to have to go home that weekend, anyway. I debated about whether or not I should even try to go, but everyone reassured me that Grandma would want me to go to my game. In fact, the last time I had seen her, two weeks prior to her passing, she had sent me home so that I could watch the Michigan-Notre Dame game.

So, it was with a heavy heart that I woke up that Saturday morning, ecstatic to drive up to Ann Arbor to finally set foot in the Big House. I looked forward to watching my boys in person, and I was looking forward to having one last big hurrah with my mother. I could sense even then that she was starting to rapidly slip.

Our first battle came over what she was wearing. She kept trying to put on red clothes. For those unfamiliar with college football, red is a no-no at Michigan, as scarlet and gray are the colors that belong to our evil nemesis (Ohio State). We finally got her in some blue. Then, she refused to put on long sleeves. While it seemed relatively warm, there was still a chill in the air. She was convinced she would be okay.

We made the hour-long drive up to Ann Arbor. Mom realized that she was cold, so she asked if she could borrow a jacket. Unfortunately, the only thing I had available was my Pearl Jam jacket I had gotten at the last concert. I still laugh every time I think of my mom walking around sporting my Pearl Jam gear. 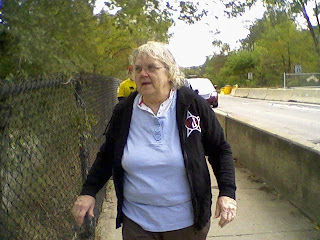 Michigan stomped all over BG. Neither one of us really cared who won, but were happy that Michigan prevailed. Mom did a relatively good job keeping up with the game, though she kept asking where we were and who was on the field. She asked a couple of questions here and there about what was happening on the field, but nothing seemed out of the ordinary. 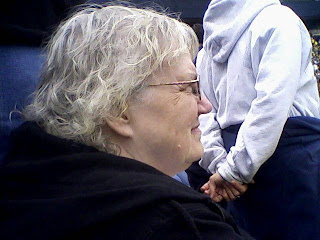 During halftime, I asked someone sitting next to us if she could take a picture of me and my mother. I had a feeling that it would be the last one of the two of us, and I wanted to mark this momentous occasion. 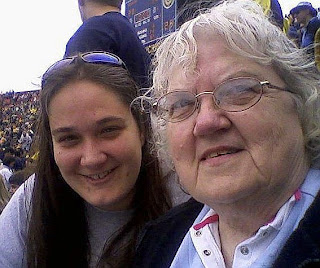 We hung around campus for a bit after the game. I did some shopping while we let the crowd disperse. Then we drove back to Bowling Green, stopping off to do a little more shopping, first. We were home within about two hours of the game ending. I started uploading the pictures from my phone to my computer, showing Mom each one. She kept asking me when I had gone to a game. She didn't believe me when I showed her the pictures of herself at the game. It was then that I truly realized how fast my mom's memory was fading. Sure enough, less than six months later, she was in a home.

I will never forget taking Mom up to that game. And I will never regret dragging her along with me. Those are the kinds of memories that keep me warm and fuzzy when I start to feel sad about losing her.
Posted by Andi at 10:09 AM

Email ThisBlogThis!Share to TwitterShare to FacebookShare to Pinterest
Labels: challenge