My Mommy Tribute: K is for Kids

My mother's whole purpose in life was to be a mother to her kids. There were just the two of us, though she had hoped to have more. Life and biology don't always work out the way you want them to, though. But Mom had plenty of adopted kids in her life.

Whenever a friend of mine was in need, my parents offered up a place to stay. I can think of several instances where we had an extra body sleeping in my bedroom, on an extra couch, or even in the basement in later years. She even attached to some of the kids Dad was sponsoring, on occasion.

Mom loved babies more than anything. Because their furniture store ended up specializing primarily in baby furniture, Mom was able to nurture women going through pregnancy. Many customers ended up coming back to visit after the baby was born. Others, who already had young children, also came in seeking several items. If there was a particularly darling baby, Mom would always ask to hold the child. And then she would often ask if she could bring the baby through the door to our apartment to meet me. If parents were apprehensive, she would excuse herself to come get me to come out to meet the baby. She just loved them and most of them did well with her. She just had that big mama vibe that was so comforting. 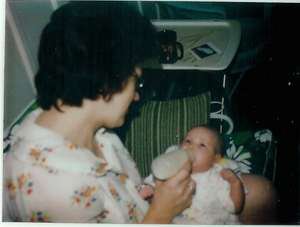 This is a picture of my mom feeding her first favorite baby - me. :-)
When it was time for me to start babysitting, Mom always gave me a lot of advice. My first job came when I was 11 years old. My first client was 4 months old, but also had a 9 year-old brother. I was there every Saturday morning. Mom insisted that I call her at least once per shift, to check in and make sure everything was okay. My second, more frequent babysitting job, started with a little guy who was about six weeks old. I was 12, but because he was so small and the hours were so long at times, Mom had me watch him at our house. I kept that job until he was almost three years old. I learned more of her wisdom from that hands-on experience than any classes or books could ever teach me.

I continued asking for her guidance as I kept babysitting into adulthood. I even shared a lot of my stories from the classroom with her. She just loved hearing stories about what the kids were doing and learning. She always perked up when she had the opportunity to come visit my classroom. On one particular trip, she was coming to school with me to visit. My assistant ended up calling off last minute. My kids had Atrium, which meant half of them would be in a different room at once in the morning. My afternoon class was always about half the morning number. My administrator asked Mom if she wouldn't mind being my assistant that morning. She was so delighted to do so that she frequently brought up the experience for several years to follow.

Mom always looked forward to having grandchildren. I was very seriously involved with a man who had custody of his five year-old daughter. My mother spoiled her as if she were her own. Alas, that relationship didn't work out and I moved on. My parents finally got to the point where they told me that they didn't care if I had the man, just bring on the grandkids! (It was somewhat tongue-in-cheek, I think!)

Again, biology and life don't always work out the way that we plan, and I was never able to give my mother the grandchildren she so desired. Instead, she is stuck with those of the cloth and plastic variety. 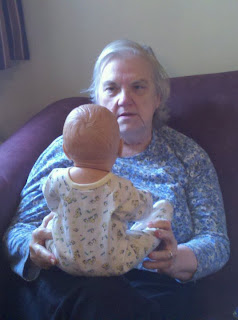 This picture was taken two days after Dad had died. We were all dressed up from another memorial service (Dad's cousin had died a couple of weeks before him) and decided to pay her a visit. When we got there, she kept playing with this doll. Sometimes, she would definitely let on that she was pretending it was real, just to freak people out. But then during other moments, I am not so sure that she knew the difference. If it makes her happy, though, who am I to judge?
Posted by Andi at 10:37 PM

Email ThisBlogThis!Share to TwitterShare to FacebookShare to Pinterest
Labels: A to Z Challenge 2012